Ah, so I’d promised a new child’s sweater at the beginning of the summer – still not done.

Instead I’d been asked to knit a replica sweater for a friend. Although I don’t generally take on commissions, I was intrigued by the project. The sweater in question was 30 years old and much-loved. It had been patched and patched and patched. And still well-loved. It simply had to be replaced so I said yes, without having even seen it.

Dolman-sleeved, knit in one piece and non-stop seed stitch. What had I taken on? Dolmans are interesting. They are complex curves, not easily reproduced. Started a hunt on the internet for the pattern. I’m sure I remember it from somewhere – no luck. Nada. 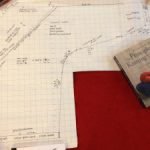 Aha! Use old tech not new tech. Got out a large piece of knitter’s graph paper and traced it. I have visions of Meagan who is six, lying on a piece of brown paper being traced for an early art project. It works – the dolman under arm seam is now broken into 5 different curves, each with its own rate of increase. I am starting to think, just maybe I can do this. 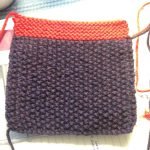 Knit the pockets. They serve as the tension square and a check on the colour combination which had been requested. 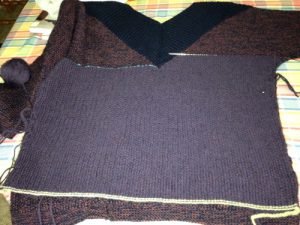 Having the original sweater is a big help and I arrange to keep it for the duration of the project. The sweater is knit in one piece. I start at the bottom of the from with a provisional cast-on, knit to the bottom of the V neck, put the left half of the stitches ( meaning left as it’s being knit) on a holder and continue by completing the right sleeve and working my way down to the bottom of the V neck for the back, putting the remaining right stitches on a shoulder. Then I go back to the left half front stitches to complete the left sleeve and work down to the V. So, if the stars align and the shaping have been perfectly repeated on both sides of the sweater you meet at the center back, join up all the stitches and skate down to the bottom hem. Stitch the side and sleeve seams, add the bottom and the wrist bands in the round. Easy. Just a quarter million stitches in seed stitch. Seed stitch is extremely unforgiving when it comes to mistakes. The critical thing was not to depend on the first calculations but to measure against the model as it is knit. A few rip-outs to get the curve right but really not too bad. 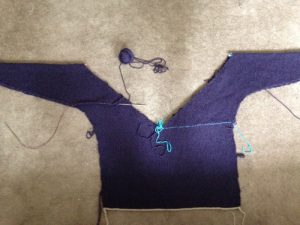 Ah but then there is the neck. You know, that lovely bright red band, a simple mistake rib (a row of knit 1, purl one followed by a knit round), with a double decrease at the shoulders, the centre front and the centre back. It’s a big band and the sweater looks quite weird without it. But I have faith. After all, I have the original and it matches the original.

You can be too confident. I know that but I don’t need to be told that. Really I don’t. Oh well. I have to thank June Hemmons Hiatt who got me out of the soup. Centred double decreases are extremely difficult to get right and it took three or four experiments (experiment: (def.) another term for ripping out) to settle on the combination of p2tog, k1, SSP to produce a satisfactory result. Then 3 more experiments to get the rate of decrease on the neck correct, meaning that the band would be wide enough to fill the hole, sit high enough on the neck and yet be big enough to pop her head through. If you rip knitting out often enough you can wear out the yarn and I’d done that. Knit Picks produces a great yarn but even the good stuff has limits.

Soooo, in spite of a possible postal strike I ordered three more balls and sat on my hands until they arrived. And knit it one more time. Whew!

Blocked it to the dimensions of the original sweater. Took 20 measurements. Got very nervous and took it to her sister to have a look at before I presented it. Despite the measurements, she insists it’s too big. I work hard to make logic trump the sister but now I’m scared. Knitting a commission is much harder than knitting a gift. Gifts you can heave at the giftee and they have to say thanks. After all you made it for them

So with trepidation I arrived at the coffee shop, sweater in hand. And here is the result. 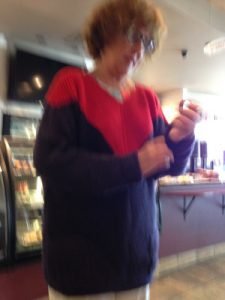 Blame me for the wiggle in the picture. Can;’t decide if it was nerves or excitement. The sweater fits, although there will be a couple of small adjustments. The yarn in the new sweater is softer and tends to hang a bit differently. I’d accommodated that correctly in the body but not in the sleeves. And it needs a couple more rows of red, but only two. 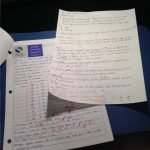 And there will be a pattern, although it will have just the one size. And it’s not going to be tested again. Assuming I can straighten out my notes.

And she has this other sweater…