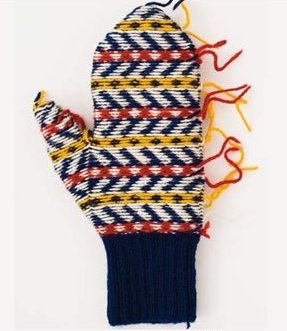 I am continuing to work on the Nursery Block sweater and it’s coming along nicely. The band shown below features on the front and the back of the sweater. To help with the spacing of the animal blocks I’ve added some eccentric letter blocks. The blocks are not centered on the band – makes for more interest that way.

Whether you decide to knit the band in a single colour or the multiple colours shown above, it will use a technique called “stranded knitting”. You use stranded knitting when you need to knit with two colours in the same row. It’s not the same as fair isle (I’ll explain that in another post).

Knitting a set of motifs like the nursery block could be quite intimidating but if you use shorter lengths of yarn, say four or five yards and untangle them every so often as you go it’s really not too tough and the result is really worth it.

Ruth Herring explains this really well in her youtube video which is found here:

Also check out our new tip which shows you some easy techniques for the right and the wrong side of the work: stranded knitting tip