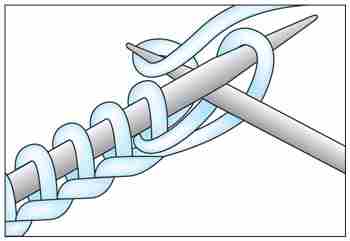 cable cast on is my go-to CO

Particularly for beginners, the cable cast on is my weapon of choice. It’s simple to learn and applicable to both stating a piece of knitting and adding stitches in the middle of your work. The easy two needle mittens pattern uses both of these techniques.

The cable cast on displays a nice tight edge which looks like a rope. Both the front and the back side of the cast on look good. If you are a beginning knitter who uses the knitted cast on, you will notice that the cable one eliminates the loops that you create in the knitted cast on – look much nicer. To see the cable cast on edge have a look at the title page of the video below.

There are two distinct opinions on this cast on.  Some describe it as firm and flexible.  Others describe it in less salubrious terms as not flexible and with a tendency to break (June Hemmon Hiatt, Principles of Knitting, 2nd ed., p. 68).  I use this cast on extensive and side on the positive side.  I’ve never had it break and I’ve never had it wear out on any edge that took a lot of wear.

Have a look at this video which shows you how to use the cable caston to begin your work:

and in the middle

Here is a second video which shows you how to do this cast on in the middle of your work:

tips and tricks for this cast on

It’s possible to purl this cast on as well. In this last video a knit 1, purl 1 rib is created, alternating knit with purl cable cast on. This isn’t limited to k1p1 rib, or ribbing at all.